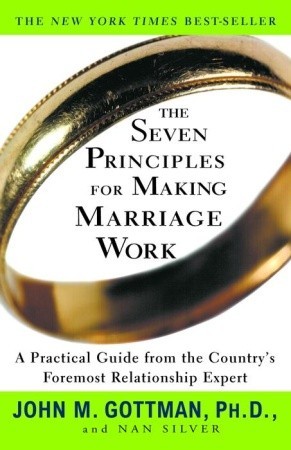 In Gottman and Silver’s book, The Seven Principles for Making a Marriage Work, the authors address the truth about happy marriages, six telling clues that a marriage is in jeopardy of ending in divorce, and the seven principles for making a marriage work. Gottman and Silver (1999) believe that deep friendship makes a happy marriage. They stated that deep friendship calls for a “mutual respect for and enjoyment of each other’s company” (p. 19). The authors explained that happy couples utilize certain tools to deescalate when faced with marital conflicts. The secret tool used by happy couples to deescalate during conflict is called the repair attempt (Gottman & Silver, 1999). A repair attempt is any “statement or action silly or otherwise that prevents negativity from escalating out of control” (Gottman & Silver, 1999, p. 22). How successful the use of a repair attempt depends on the depth of the friendship. Therefore, the deeper the friendship the more likely for a repair attempt to work in marital conflict resolution.

The authors also discuss seven principles for making a marriage work. Gottman and Silver (1999) address the topic by explaining how and why the various principles are potent. They also utilized useful exercises to help couples develop the needed skills to enrich and rebuild their relationships. The first principle, enhance your love maps emphasizes on the importance of knowing what is going on with each other. This includes know each other’s likes, dislikes, worries, stressors, friends etc. Gottman and Silver (1999) indicate that the absence of a love map makes it difficult to really know your spouse or truly love them. The second principle is nurture fondness and admiration. This principle entails honor and respect for each other despite flaws in personality. Fondness and admiration are vital in a satisfying and long-lasting relationship. The presence of these two elements makes a troubled marriage salvable (Gottman & Silver, 1999). Turn toward each other instead of away is the third principle for making marriage work. Couples who make connections during small moments tend to stay together. According to Gottman and Silver (1999) couples who turn toward each are passionately involved, thus “ they are building up emotional savings that can serve as a cushion when times get rough, when they’re faced with a major life stress or conflict”(p.80). Being emotionally engaged keeps the flames of romance alive, thus “a romantic night out really turns up the heat only when a couple has kept the pilot light burning by staying in touch in the little ways” (Gottman & Silver, 1999, p. 81). The fourth principle is let your partner influence you. Gottman and Silver (1999) stress that if spouses create the opportunity for influence, it will foster a more profound degree of respect. Gottman and Silver (1999) suggest that instances of happy marriages are obvious when power and decision making are shared. Differentiating between solvable and perpetual problems is the fifth principle for making marriage work. Gottman states that conciliation is important in order to facilitate solvable conflict resolution (Gottman, 1999). This can be realized by the softening of one’s start up, learning to create and receive repair attempts, soothing oneself and your partner, compromising and tolerating the faults of one another (Gottman, 1999). Furthermore, the sixth principle for making marriage work is overcoming gridlock. The crux of this principle is to acquire necessary skills that are needed to talk over the perpetual problems in marriage. Knowledge of how to get out of gridlock keeps couples from dissatisfaction. The final principle for making marriage work is having a created shared meaning. When couples have a shared dream, spirituality, culture, or values their marriage is strengthened, thus “the more shared meaning you can find, the deeper, richer, and more rewarding your relationship will be. Along the way, you’ll be strengthening your marital friendship” (Gottman & Silver, 1999, p. 246).

The authors urge couples to have high expectations for their marriage and work towards realizing those expectations.